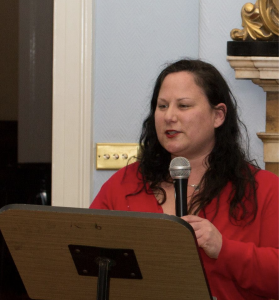 LISA FRANK was born in Los Angeles, where she lived for the better part of twenty-seven years, spending her early twenties working in a record store, the token girl behind the counter with dyed black hair and a nose ring. In 1997 she moved north to Portland, where she received her BA in English Literature. From there, she went back to Los Angeles for a brief stint before bouncing back up north, this time to Washington State. In 2005 she received her MFA in Creative Writing from Eastern Washington University (the same creative writing programme from which Paula Meehan received her MFA), and two years later, on the winter solstice, she moved to Ireland. Her very first publication, ‘The Evolution of the Seven Deadly sins: From God to The Simpsons’, was reprinted in a popular American university textbook on writing, published by Prentice Hall.

Lisa worked as a literary editor from 2002 to 2010 and has taught English and creative writing to a variety of students, including university undergrads and inmates at a medium security mens’ prison. Co-director of Doire Press, she is also the editor of Galway Stories and co-editor of Belfast Stories and Galway Stories: 2020, featuring many of Ireland’s best fiction writers.

She lives in Connemara with her partner in crime and partner in life, John Walsh.